Penny Auctions for a Cause?

CP Pilot is still having server problems as the site keeps going down and giving me the “500 Internal Server”error code. Keith must be a pretty generous guy to put up so many great items on the 2nd day of operation. Or is he? It’s not a good idea to put up so many big ticket items on the first days of the auction especially with site instability, but it looks like he already has many users and this is not deterring them from bidding.

Keith just sent out an E-mail with a few tips: He says to not use the Bid Butler until further notice, apparently there are some kinks in it right now. Also,

“A point was made earlier today about reserve prices – how they aren’t disclosed anywhere on the auction. In the future please look for this information in the Delivery Options. Currently the two large TVs and Moped have a reserve. The software currently doesn’t have a way to disclose this automatically.”

“When an auction is “Paused” – the website is taking a minute to calculate the bidding order of a sudden bidding influx.”

“When an auction is “Closed” – the site is taking a minute to investigate fraud. If fraud was detected, the auction will stay closed and upon investigation by admin (me at the moment), and bids will be refunded. IF there was a false alarm for fraudulent activity, the auction will begin up to 60 seconds later. the reason this is – people have been known to write programs to guarantee a win by producing false bids…there are tell-tale signs for this, and the website looks for them.”

“When an auction is “Finished” – To the victor goes the spoils. The auction is completed and the last bidder receives the goods upon payment.”

Check out the big ticket items that are ending now simultaneously.

Since Keith told us that he implements reserves and there is no way for the software to specify that as of yet.Â  It looks like Cp Pilot may be using bot bidders to bid against legit bidders in an effort to hold items in reserve. It makes us wonder how many real people have actually won any of the auctions that have ended thus far.

Take caution: When you come across a pay-per-bid auction site that tells you they reserve the right to have a reserve and deny using computer generated bidders. More often than not the reserve is not disclosed up front, either with a pay-per-seat auction or higher starting bid price, when this happens be on the look out for computer generated shill bidders.

Try and ask the penny auction staff whether or not they do this and they will ignore you because they know they are taking real bidder’s money and if the bidders knew the reserve they would not want to bid. Yes, that is an actual answer I just received from Penny Auction Gift Cards (they did tell me when they get more active users they will get rid of their reserves.)

CP Pilot Auctions made it known that the two TVs and the MoPed had reserves, they even specify in their terms & conditions that they have the right to hold a reserve. They do not tell us that the reserve is held by computer generated bidders. CP Pilot also did not tell us they had reserves on any other items.

Take a look at the screenshots from the current Moped 3-Wheeler auction in comparison to a Wii that was up earlier today: 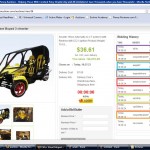 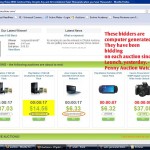 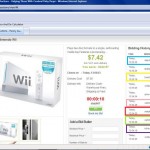 Our message to reverse/penny auction sites when it comes to using BOT bidders is this: Instead of wrecking your new endeavor from the very start why not place lower priced items up until you generate a following of REAL people. What happens when penny auction sites use computer generated bot scripts in their auctions is real people get scammed out of their money thinking they actually had a chance of getting an item at a discount.

::2nd EDIT:: Ok, We probably should give Keith the benefit of the doubt, in his E-mail he says he needs to take some time to read the user guide for the auction script he is using, maybe he will fix his script soon and will either pull or disclose the automated bid bots.Â  We’ll watch.

Just got this E-mail from Keith:

“I’m going to refund everyone 10 bids. I thought it was odd that there were “users” bidding on multiple items AT THE SAME TIME. Turns out there were three (or more) people that have been following me on Twitter, that implemented a bidding program. On top of that, I went on the site this morning, and there were 12,000 bids on 3 different items – yet only a handful bought bids for that day or the day before.I want to get suggestions from you, the correct way to handle this situation fairly for all. Please don’t get deterred. I’m trying to do a good thing – it just seems one thing after another keeps happening. From just the few days it’s been up and running I’ll be able to make a $300 donation at the end of the month (hopefully more, from when we continue).After the weekend, I’ll have made the correct upgrades so this doesn’t happen again (I’m so exhausted). I guess bad things happen to good people. Those of you that did win…please fill in your shipping and billing information, I’ll be sending out your goods shortly; Thank you for hanging in there. A disappointed Keith.”

Disclaimer: Links to penny auction Web sites are included for the readerâ€™s reference and do not constitute an endorsement or the legitimacy of the online auction websites, or any associated product or service therein. Thank you and, as always, remember to use your own discretion and do some research when bidding on penny auctions.

That’s why online pharmacies is becoming more pops over the last years. Well-known are remedies which are used to reduce inflammation caused by inflammation of the skeletal muscle etc. There were only few examples. Did somebody tell you about canadian generic Viagra? Maybe you afore know about the question. Sexual malfunction can be a result of a physical condition. Even when it has a physical reason, psychological problems can make the disorder worse. Sex drive problems are so commonly a product of how you feel that there is slightly to that “headache” saying after all.

Filed Under Legit or Not? Tagged With automated script bidders, bot, cerebral palsy, pay-per-bid, Penny Auction, reserve, Reverse Auction, scam, shill
About the author: Connect with me on Google+
7 comments… add one