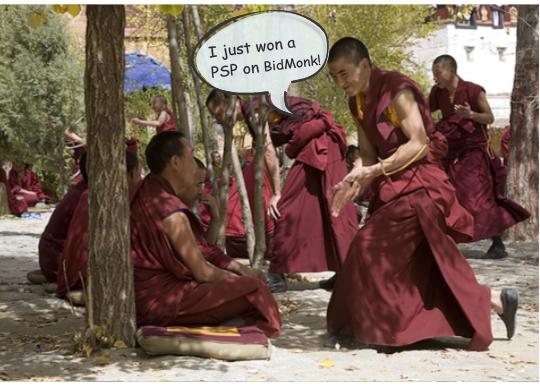 BidMonk, the penny auction site with the peculiar name, has re-launchedÂ  today with new features.Â  They were down for a few weeks to fix technological problems that occurred during their first launch.

As more penny auctions are launched we will see each one try to compete against the others. BidMonk, in an effort to stand out from the crowd, lets bidders “bid different” with seat auctions, “spell casting,” and points to reach new levels. As an incentive to bid more, BidMonk will offer certain auctions only to bidders who have reached certain levels.

BidMonk auctions are seated, unlike Jungle Cents you do not receive unlimited bids,Â  only a limited number of bidders (so far 30) can participate on any one auction and they can only be seated in one auction at a time. A bidder can also be unseated if they go idle by not bidding or “casting a spell” after 9 minutes and 59 seconds.

You can cast spells – there are various spells you can use. Some of them manipulate with auctions’ time and others manipulate with auctions’ price. You can use the spells to manipulate with other users and to use your psychological skills and win the auction.
You gain levels – With every bid you make or spell you cast you receive experience points. The experience points needed for each level are brought out here: I am at level 2 but I cannot use level 4 spells!. With each level you gain a new spell and in the future you can play on premium auctions of which you can read from here.

Read more on BidMonk developments at their blog.

What do you think of BidMonk? Have you won & received an item from the first launch?