Just yesterday the owner of the late penny auction Yottabid.com came on the PAW forum and posted this message:

I watched the creation of this site as I ran Yottabid.com. You may remember us and there seems be some people willing to bash our name with no proof. It was unfortunate that we had to close but it wasn’t for any reason that people think it was.

Additionally, I’m sorry if people were mislead by the website developer. It was outsourced to a company in India and they continuously use some user names we had on our site. If you would like them to quit using some our names you can email them at reputeinfosystems@hotmail.com or   ankurchotai@gmail.com

There were several problem users that created some situations that got out of hand but the wrong steps were taken.

If anyone has any questions feel free to ask. I will try to answer some questions. If the pennyauctionwatcher would like to email me I would like to talk about things with our site.

The owner of Yottabid.com admits that YottaBid was not shilled:

“From support@yottabid.com, September 28th 2009:
After long contemplation, we will not be coming back but it is up for
possible sale. If you are intersted please email a request to
zacreth@gmail.com
Thank you,
Yottabid Staff”

Also read this thread. Gee, was it merely coincidental for the SELLER of YOTTABID to have Zacreth in their gmail address when Zacreth had bid against paying bidders on Yottabid.com…? See the screenshot, click to enlarge: 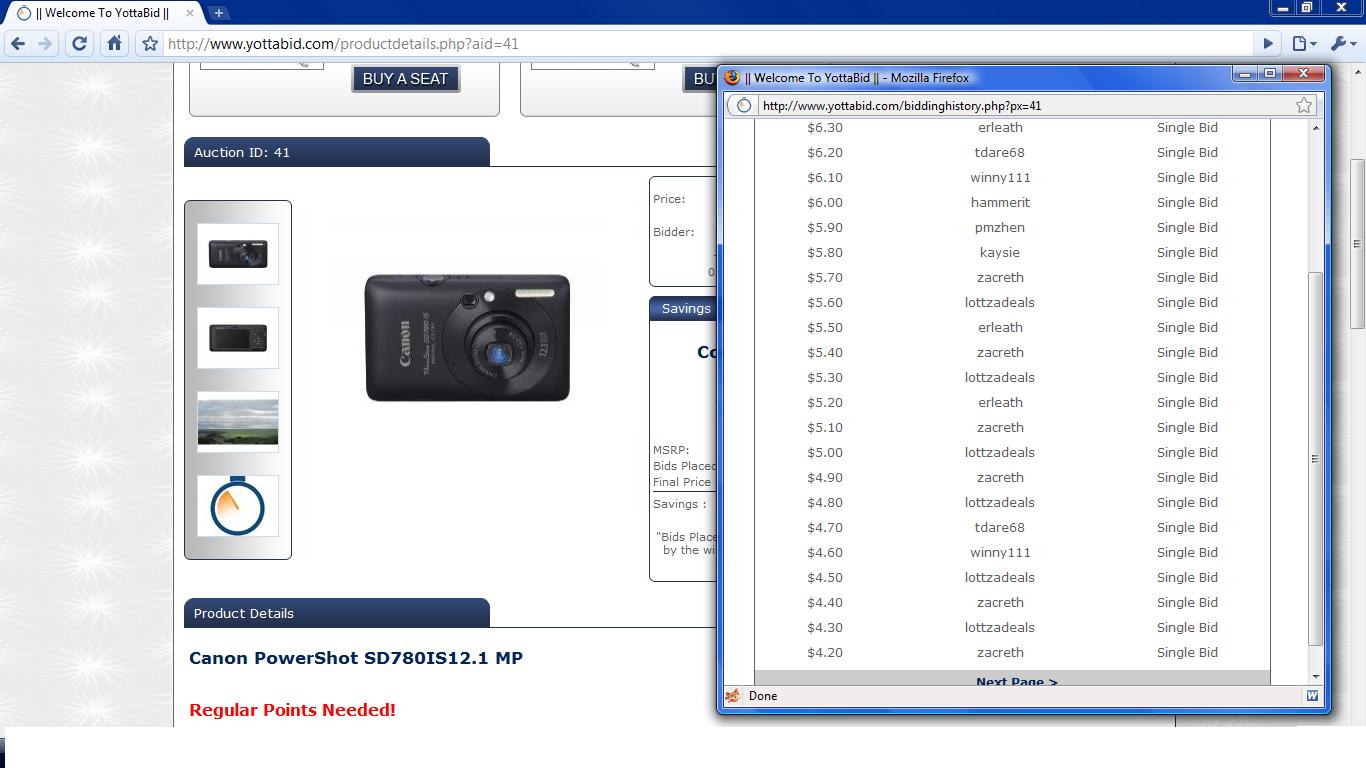 I just now checked the admin console of the PAW forum for the user “Yottabid,” their e-mail is zacreth@gmail.com. Answer that one. Penny Auction Watch is replete with examples of penny auction sites seemingly shill bidding, this is just another example.

That’s why online pharmacies is becoming more pop over the last years. Well-known are remedies which are used to reduce inflammation caused by inflammation of the skeletal muscle etc. There were only few examples. Did somebody tell you about canadian generic Viagra? Maybe you along know about the matter. Sexual malfunction can be a result of a physical condition. Even when it has a physical reason, psychological problems can make the disorder worse. Sex drive problems are so commonly a product of how you feel that there is some to that “headache” saying after all.

Filed Under Legit or Not? Tagged With penny auction scams, scam, shill bid, yottabid
About the author: Connect with me on Google+
2 comments… add one