Penny Auctions: The War of Attrition in Practice

Did you know that when you bid on penny auctions you’re actually partaking in a game theory problem? It’s called the War of Attrition.

War of Attrition Defined: a contest that is settled without any escalation (no chance of injury from direct interaction between the contestants) with the winner being the individual who is willing to pay the most (essentially via display) to obtain the resource.–College of the Holy Cross, MA 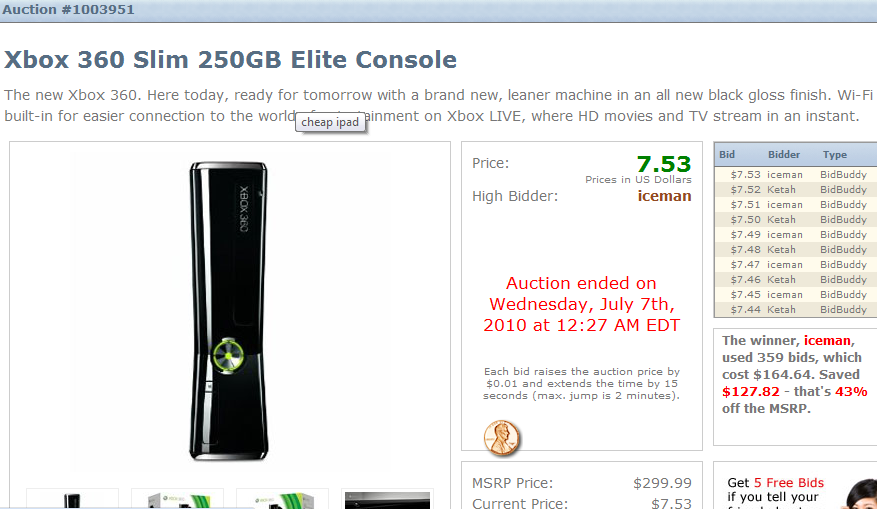 The winner of this Xbox on Bidrodeo spent $127.82 in bids and won, the others lost.

Let’s say you’re bidding on an item worth $299, you’re always bidding against another bidder, and you each take turns bidding for the item. After each bid your opponent places you may choose to either bid or to walk, so may the other bidder. It’s obvious that the first bidder to drop will walk away with nothing, if you don’t drop you can win the auction and walk away with the item, this is if there were only two bidders. The odds of you winning with more bidders bidding becomes greatly diminished, but it depends on how many bids the other bidders will place and when they will stop bidding. Sometimes it’s better to be bidding against multiple bidders than one-on-one, ego comes in here (more on this later).

But do the odds really become less or greater? Since you don’t know how many bids the other bidders will place, you only know how many bids you will place. Is there any predictability? Some argue that they are able to “size bidders up” by keeping tabs on their bidding style, but your opponents could change this up at any time and anyone can enter the auction and bid at any time.

Both bidders can choose to walk away, you or your opponent, whoever stops bidding will forfeit the item and the money spent (in bids) to try to win the item.

With each bid placed you’re losing $0.75, so when do you call it quits? When you run out of bids or do you ever?  When you spend the value of the item and want to try to cut your losses by winning and not walking away with nothing? Or do you only spend a % of the item’s value so you don’t lose too much then stop bidding?

What is winning worth to you? Do you bid to win at all costs?  there are some that do, (don’t answer this question with your bidding username, if you choose to).

The Winners Curse: The cost to win an item ends up becoming more than the item’s value, this happens quite often in penny auctions. Here’s a good lecture from Yale University that illustrates Winner’s Curse:

Is There a Secret Strategy?

Many have argued that there’s strategy involved in penny auction bidding and we’ve really tried to think up various strategies and put them in practice over the past year and a half, but we’ve really come to conclude that there is not much real strategy.

Only different modes of bidding. Ultimately, to win you must be the last man standing, so to speak,  so in order to win you must bid until you win (obviously).  Just when you think you might be able to win, a new bidder armed with hundreds of bids could come in, but is this what makes the game exciting?

How do you feel when you bid?

Do you get stressed out after you’ve poured more money into winning and you’re still hitting bid?

How do you bid?

Well, you could do this a number of ways, from bidding each time an opponent bids against you, not  letting the timer drop more than a second (we call this bid throttling), to sitting back and only hitting the bid button when the timer ticks down to mere seconds before 0, all while watching your opponents bid more than you do. Or,  you can wait until the auction has been going for quite some time and then begin to place bids after you think you observe weakness (let’s say the bidders have lost a significant amount of money) in your opponents, but this does not guarantee that either of the current bidders will back down and let you win after you start bidding.

And then, Why do you bid?

Maybe you end up getting great deals on items, maybe you resell what you win or keep the items for yourself. Maybe you just enjoy the feeling of winning, or you became hooked after getting a significant deal. Or maybe we’re missing something, tell us why you bid! 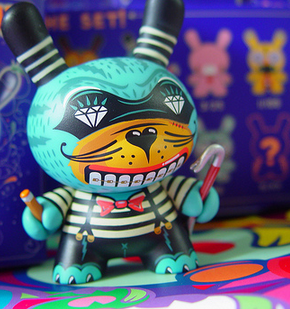 Are you an emotional or competitive person?

Ok, maybe you’re not characterized as either of these, nor have you ever been known to show signs of anger nor have you ever let your ego cloud your perception, that was until you started bidding on penny auctions.

Ego has been known to overtake a lot of people while bidding, after all, they’re spending their money & time and just want the auction to end, but at the same time they want to win the item so ruthlessly that they will, haphazardly and at all costs bid, and purchase more bids until they win.

Is this a problem? It can be if you are overtaken with a drive to win and you’re not careful. Some penny auction bidders have spent much more in bids than they have in items won. Some argue that they bid for fun and don’t care if they have to spend more in the process.

Becoming reactionary by succumbing to ego and refusing to see defeat and let go of winning an auction can come with consequences, and unfortunately, bidders that let this happen are oftentimes reminded with their monthly credit card statements.

If you would like to diminish your losses you may be interested in trying sites that offer a bid-to-buy option, where your bids can be put towards purchasing the item.

Let’s talk about it!

That’s why online pharmacies is becoming more pops over the last years. Well-known are remedies which are used to reduce inflammation caused by inflammation of the skeletal muscle etc. There were only few examples. Did somebody tell you about canadian generic Viagra? Maybe you yet know about the matter. Sexual disfunction can be a result of a physical condition. Even when it has a physical cause, psychological problems can make the disorder worse. Sex drive problems are so commonly a product of how you feel that there is something to that “headache” saying after all.