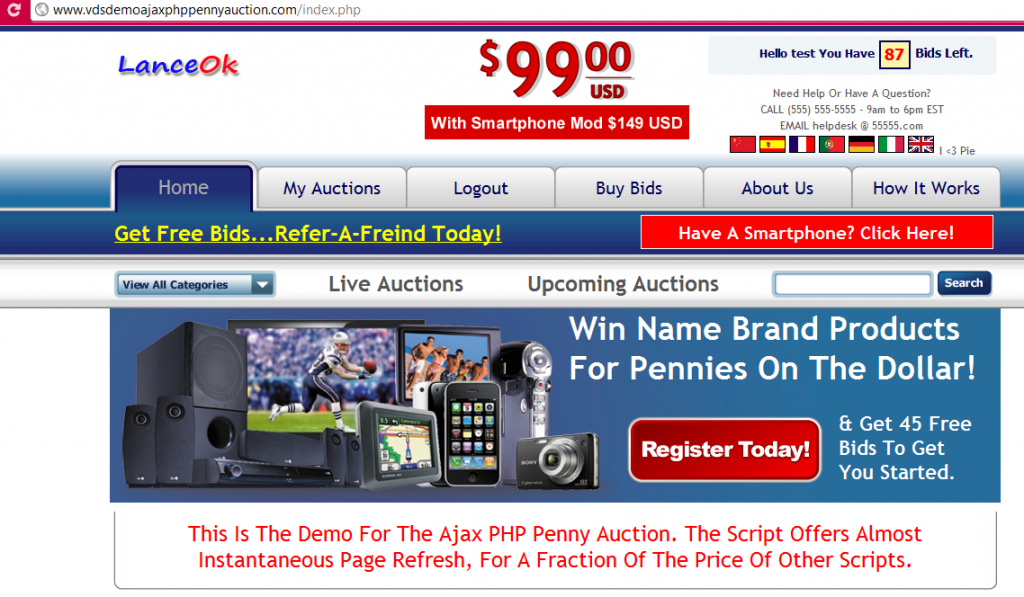 The AjaxPHPpennyauction.com penny auction “Swoopo Clone” script is being sold with automated bot bidders, the admin console of the demo site (and also of live sites) states that these “automated users” are for testing purposes, but what’s stopping a less than honest penny auction operator from turning them on?

If you’re a new to penny auctions you may not be familiar with what a “bot” is, when we refer to a bot we’re referring to a fake bidder on a penny auction site (sometimes referred to as “shill” bidders). Bots are programmed by either the site operator or software developer, so it’s in house.  Penny auction site owners have been found to use these bots to hold hidden reserves, some have even taken pride in not shipping items out to consumers while letting their “bot/admin bidders” win items.

It needs to be stopped, penny auctions need to be regulated & audited.

Take a look at the AjaxPHPPennyAuction.com Demo Script:

AjaxPHPPennyAuction calls these bidders test bidders and even displays the following disclaimer, so we know they’re not actually telling site operators to use them (unlike others who’ve been known to refer to them as an “Intelligent Investment Protection (DigitalFruit.ee),” “Angels=Body & Business Guards NashBrookyln.com“):

“Automated users were design specifiically for beta testing your website before launch. Be aware that the bots were not designed to always win an auction or to meet a specific price traget. The use of automated bot bidders after going live is ethically questionable and will likely damage your website’s reputation if used.”

Take a look at just how easy it is to add these “automated test users:”

The Ajax PHP script even allows site operators to choose the time the autobidders start bidders, amount of autobidders per item and their frequency:

Developers should not even distribute penny auction scripts with the bot functionality, period.

The AjaxPHPpennyauction.com is just another example of a penny auction script that can be easily obtained (in this case only $99!) by an unethical, greedy? penny auction site owner to cheat paying bidders.

We were also just aware of a security flaw in this script on some sites, the bot script options are publicly accessible and you can see whether or not a site has the bots ticked on.