BigDeal.com Shut Down Today, Contracted with BidCactus to Honor Bids

BigDeal.com, the competitive shopping penny auction startup from San Francisco has ceased operations today. BigDeal launched in November of 2009, and was heavily backed. Their first round of funding alone, received from venture capital firms Mayfield Fund, First Round Capital and Foundation Capital, was reported by the New York Times to be $4.5 million (SEC filing).

I personally really liked BigDeal.com and it came to be my favorite penny auction site.  I bid there quite a bit, and won many items, when they first launched and in 2010.

BigDeal’s corporate name was Project Fair Bid, Inc., and in my opinion, they really did aim to provide a fair bidding experience for penny auction bidders. What

I especially liked about them, other than the fact that I got my awesome iMac 27″ for under $300, is that they offered the 100% buy-it-now option, and were really one of the first to offer anything like it. Plus, they had the best bid history information that I had ever seen.

A few months ago BigDeal stopped offering their designer handbag and accessory items, then they got rid of the majority of their high-ticket product offerings. They used to offer many laptops, MacBooks, dSLR cameras, iPads, iPods, iPhones and other popular items until in recent months they offered hourly auctions for albeit useful, lower-priced items such as SD cards, small keychain tools, and a lower priced digital camera.

Though BigDeal didn’t comment on why they are shutting down, they had desirable items, but they seemed to only have the same mix all the time, it also seems that a few “powerbidders” won items at significant discounts time and time again (i.e. 15+ MacBooks for bidders who only “buy MacBooks,” etc.

When I was living in San Francisco last summer I had the opportunity to visit BigDeal’s office and met with Nicolas Darveau-Garneau and a few in the BigDeal team, I’d like to thank them once again here and wish them the best in future business endeavors.

I’d also like to personally thank their venture capital backers, it was awesome that they took the risk on a new industry, which over the past year has shown itself to be, even more so, filled with pitfalls.  Their shipping was quick and I wasn’t disappointed. 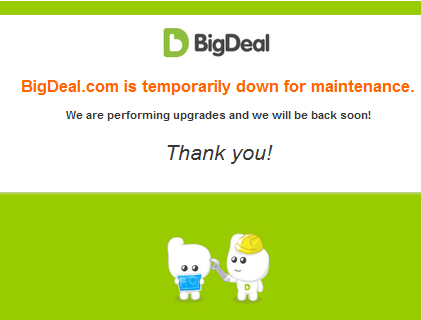 Wondering what you will do if you had bids left on BigDeal?

BigDeal.com has contracted with BidCactus to allow users the choice to transfer their bids and account to BidCactus. Any questions can be directed to rachel[at]bigdeal[dot]com. For more information on BidCactus.com read our previous posts and discuss this in our forum. BidCactus is an audited (2 years in a row by Ernst & Young), founding member of the Entertainment Auction Association.

Are you disappointed to see BigDeal go? Discuss this http://www.pennyauctionwatch.com/forum/general-penny-auction-discussion/16037-just-bigdeal-com-shut-down-today.html with us.

That’s why online pharmacies is becoming more pop over the last years. Well-known are remedies which are used to reduce inflammation caused by inflammation of the skeletal muscle etc. There were only few examples. Did somebody tell you about canadian generic Viagra? Maybe you along know about the question. Sexual dysfunction can be a result of a physical condition. Even when it has a physical why, psychological problems can make the disorder worse. Sex drive problems are so commonly a product of how you feel that there is some to that “headache” saying after all.

Filed Under Auction News Tagged With bigdeal.com, Penny Auction, penny auctions
About the author: Connect with me on Google+
3 comments… add one

Next post: Is RealPennyAuctions.com Legit, Why Can We Tell Who Will Win and When?