Listia Auctions a Fun Way to Swap Old for New, Buy Credits Too

This one falls under the category of entertainment shopping and not penny auctions, but for many people Listia.com´s auctions are a fun way to shop and swap.

Learn how Listia works from one of our reader´s who has bought and sold items and really enjoys this new way to barter and bid:

Are you looking for a way to get rid of your unused, unwanted items?  Listia is a company that has only been around for two years.  It has been featured by TechCrunch, Mashable, The Washington Post, Los Angeles Times, PCMag.com and ABC. Many members are enjoying their bartering service.  It is a fun way to receive new or used items for free.

How does Listia work?

When a new member signs up on Listia.com, they automatically receive 400 credits.  Once the Listia member’s account is activated then the member can receive more credits by completing the tutorial and listing his/her first auction.  The auctions work somewhat like Ebay.  All Listia members have a certain amount of credits.  The credits then in turn can be used to bid on items that he/she wants.  The bidder with the highest number of credits wins the auction.  All of the items are free on Listia with the only exception of having to pay shipping and handling on some, which is usually not more than a couple of dollars.  The credits from the winner of the auction are then transferred to the lister, and in turn the lister stacks up his/her credits until he/she wins an auction of his/her own.

What kind of items can I list or win? 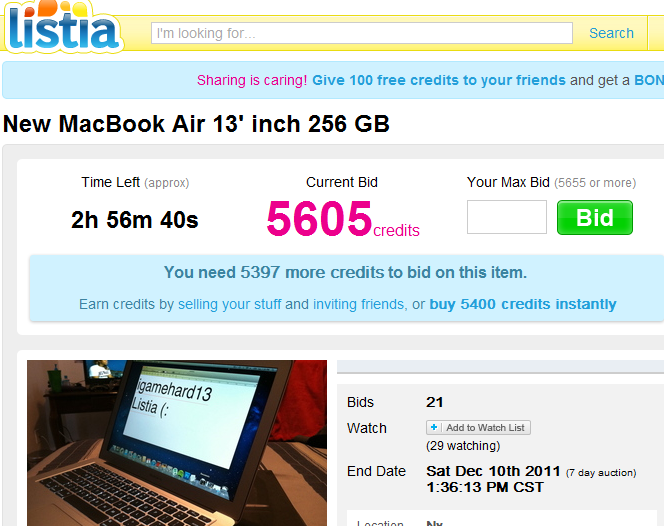 Listia members can list or win almost anything used or new from clothes, electronics, toys, books, collectibles, gift cards, etc.    They do prohibit items that can be won, see their site for more details.

In general, if it is non-perishable and you can get it from a general merchandise store like Wal-Mart, there is a good possibility that you can win or list it on Listia.com.

How can I buy or earn credits?

Not unlike penny auctions in that they sell bid credits, if you need credits quickly to bid on Listia you can buy them through Listia via PayPal or a credit card. Credits are currently on sale for:

Although, it may be quicker to buy credits or to earn credits by referring friends and/or completing offers, the best way is to list items.

Some items may go for a little as one credit (you have the option of starting the bid between 1-100 credits) or more than 10,000 credits.  It all depends on what other Listia members are looking for and how much they want the item.

Have you bid on Listia.com? If so, what are your personal experiences with the auction site?

I’ve been a member of Listia since July 4, 2011, and I am completely satisfied with how Listia works.  I’m so happy with Listia that I would recommend the company to all my friends and family and give it a rating of 5 stars.  All of the items I have received thus far have been exactly as they were represented.  I’ve given away 13 items, and have only had problems with two winners.  One of the winners never contacted me.  The other winner refused to pay shipping even though the shipping on the item was less than $2.

The nice thing about Listia is that both the winner or lister can leave positive, neutral or negative feedback.  This is helpful in case there is a winner that refuses to pay shipping or if a buyer really isn’t sending the items won.  Listia does offer Listia Assurance.  For example, this will allow the winner to receive a full refund of his/her credits if the item received is misrepresented, doesn’t work, or if the lister changes the terms of the auction.

If you would like to try Listia, please sign up to enjoy the benefits of getting rid of your old, unused items for used or new items that you want: Become a Listia Member and earn 100 free credits.

This blog was written by Penny Auction Watch reader, Elisheva H.  Thanks Elisheva!

Do you have an idea, tip or story that you think Penny Auction Watch readers would be interested in? It can be either entertainment shopping or penny auction related.

That’s why online pharmacies is becoming more pop over the last years. Well-known are remedies which are used to reduce inflammation caused by inflammation of the skeletal muscle etc. There were only few examples. Did somebody tell you about canadian generic Viagra? Maybe you already know about the matter. Sexual malfunction can be a result of a physical condition. Even when it has a physical reason, psychological problems can make the disorder worse. Sex drive problems are so commonly a product of how you feel that there is something to that “headache” saying after all.

Filed Under Entertainment shopping Tagged With auctions, barter, listia auctions, listia.com, pay per bid credit auction, swap
About the author: Connect with me on Google+
6 comments… add one