We’re Protesting Censorship – Join In and Take Action to Protect Our Freedom! 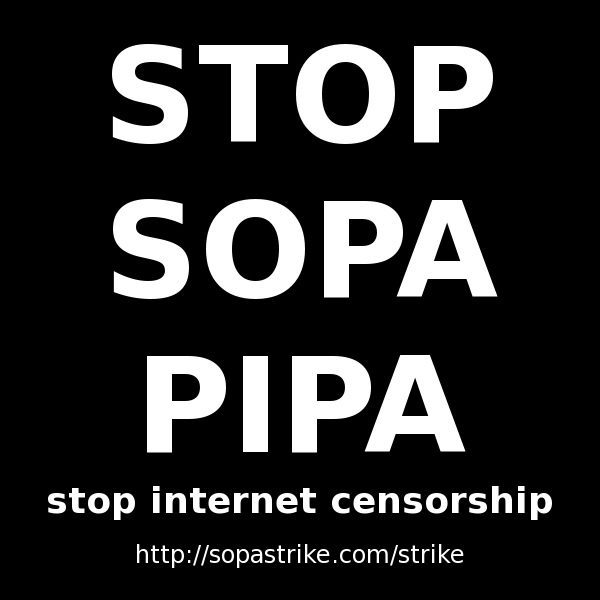 “Never doubt that a small group of thoughtful, committed citizens can change the world. Indeed, it is the only thing that ever has.” – Margaret Mead

Today is the Internet Blackout Day in protest against Senate Bill 968: the Protect IP Act that is set to go before US Senate next week.

Internet freedom is at risk if the Stop Internet Piracy Act (SOPA) in the Senate and the Protect IP Act (PIPA) in the House are passed.

Hopefully a victory? SOPA has been reportedly shelved until further notice.

However, on January 23rd Senate will be back in session and getting ready to vote on the Protect IP Act, SOPA’s sister bill. Call Senators on the 25th and voice your opposition to this censorship legislation.

Not only is Penny Auction Watch participating in today’s protest –  Over 6,000 other websites from personal blogs to Wikipedia, Google, Flickr, reddit, Tucows, the Electronic Frontier Foundation, and Mozilla are standing up and speaking out.

We are asking you to educate yourself and take action right now to help stop this dangerous legislation from being passed.

If passed the face of the Internet will be forever changed and even sites like ours that host forums and information will be at risk of shutdown, and operators imprisoned.

Watch the following informative video PROTECT IP / SOPA Breaks The Internet from Fight for the Future on Vimeo.

Contact Congress – Write  or Call your Senator or Representative.

Right now, before it’s too late!

Also see these three articles on SOPA and PIPA:

Useful links for the black out day from the Electronic Frontier Foundation:

Some rights reserved by nicubunu.photo

That’s why online pharmacies is becoming more pop over the last years. Well-known are remedies which are used to reduce inflammation caused by inflammation of the skeletal muscle etc. There were only few examples. Did somebody tell you about canadian generic Viagra? Maybe you yet know about the matter. Sexual dysfunction can be a result of a physical condition. Even when it has a physical why, psychological problems can make the disorder worse. Sex drive problems are so commonly a product of how you feel that there is some to that “headache” saying after all.