Penny Auction FunkyShark’s “Funkiness” Gets Them In Trouble, Big Trouble 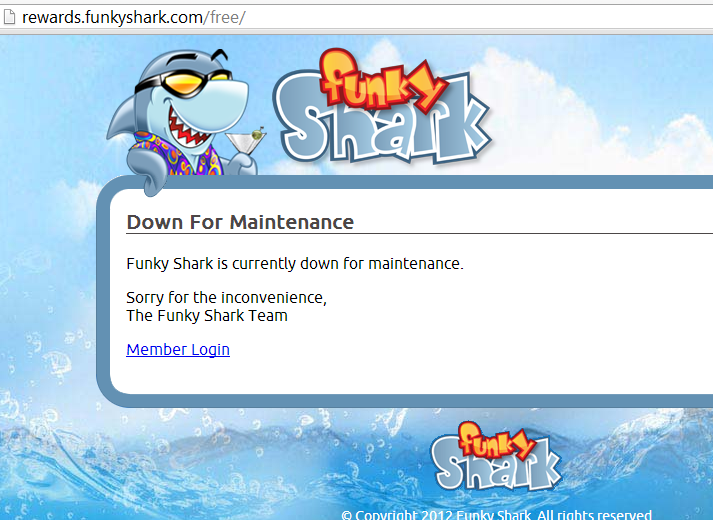 FunkyShark = Funky, but not in the radical/cool/surfer dude funky way….

Just a little over a month ago we told you about the latest penny auction offering a “MLM/referral” component, FunkyShark.com. Something didn’t smell right about that one. FunkyShark went as far as to proclaim in their marketing that the business model was “your license to print money”

FunkyShark was selling “founder positions” in a pyramid-scheme like model at $1,000 a pop with hopes of garnering interest from folks in the MLM arena, maybe even from those who were ripped off by ZeekRewards? Who knows… but the state of Montana and the SEC does and they’re not playing games. The SEC especially. Anyone remember what happened to Zeekler’s ZeekRewards? Another one we didn’t want to touch with a 10 ft pole as even the auctions left us with unanswered questions.

When we came across this new penny auction site/MLM scheme, FunkyShark.com, we found one particular MLMarketer on YouTube, of course a founding member who dished out $1k in hopes of making it big, sing FunkyShark praises and tout how its founder launched 11 successful multilevel marketing programs and how it was so legit.

As stated in our last post about FunkyShark, we noticed that in the promotional video for the FunkyShark rewards program Scott Walker claimed to be selling “stocks, or shares so to speak” in Funky Shark. Hmm?” Stocks and shares, eh? Learn from the mistakes of history so as to not repeat them. Sound familiar? —See The SEC Shut Down Zeekler and ZeekRewards.com MLM Penny Auction $600 MILLION Ponzi and Pyramid Scheme

Just last week the State of Montana named FunkyShark in an order and its alleged operator agreed to pay a $40,000 fine and repay $834,000 to investors, the office of the Montana Commissioner of Securities and Insurance Monica J. Lindeen said.

From the Consent Order:
“WHEREAS, based on the CSI’s investigation, the CSI alleges that Respondents violated
Mont. Code Ann. 9 30-10-202 by selling unregistered securities from within Montana in the
form of Funky Shark Founder (Founder) shares.”

From the Montana Comissioner of Securities and Insurance posted on December 20th:

Wacker also agreed to pay back more than $834,000 to investors to resolve a restraining order Lindeen’s office filed against him in October. The restraining order stopped Wacker from soliciting new investors or spending any of the investment money he had already raised.

Last September, Wacker began recruiting investors for his penny-auction website, FunkyShark.com. By the end of October, Wacker had raised over $1 million from investors across the world.

The flurry of transactions in Wacker’s personal and business accounts led his bank to file a suspicious activity report, which was referred to Lindeen’s office. After reviewing the report, investigators suspected Funky Shark was a pyramid scheme and requested a restraining order to prevent additional investors from getting involved.

On Oct. 30, Wacker posted a notice on Funky Shark’s website explaining that its investment program “may violate certain securities laws in the United States.”

In the two months it operated, Funky Shark paid nearly $378,000 in commissions to participants who recruited new members. Those commission payments left Funky Shark unable to repay all of its participants in full, so Wacker agreed to pay $270,000 out-of-pocket to make investors whole.

“Mr. Wacker stepped up to the plate and repaid his investors,” said Lindeen. “Often when we handle these types of cases, there’s simply no money left to repay participants. But for a number of reasons, this case is unique. Mr. Wacker didn’t understand what he was getting into, and he has expressed his commitment to setting things right.”

In August, Lindeen’s office issued a consumer alert about a penny auction pyramid scheme called ZeekRewards. More than 1,200 Montanans had invested $3 million in that scam before the Securities and Exchange Commission shut it down.”

The following was posted in our forum back in October:

50% of our auction profits get paid out DAILY to people who play in the auctions.

This is “Shopping Gone Wild”

Watch our 7 minute video now, and your view of making money with an online home business will be forever changed.

This is different. This is fun. This is cheap.

All the best,
Haydn Stevenson”

That’s why online pharmacies is becoming more popular over the last years. Well-known are remedies which are used to reduce inflammation caused by inflammation of the skeletal muscle etc. There were only few examples. Did somebody tell you about canadian generic Viagra? Maybe you along know about the question. Sexual malfunction can be a result of a physical condition. Even when it has a physical reason, psychological problems can make the disorder worse. Sex drive problems are so commonly a product of how you feel that there is something to that “headache” saying after all.

Filed Under Auction News Tagged With fine, fined, funkyshark, montana securities and exchange commission, Penny Auction, Ponzi Scheme, scams
About the author: Connect with me on Google+
0 comments… add one