DealDash Founder Wins Entrepreneur of the World Award for Finland

Congratulations are in order for DealDash.com penny auction site founder William Wolfram! William has just won the Ernst and Young 2014 Entrepreneur of the World award for Finland!

I’ve had the privilege of meeting with William and he’s definitely a very gifted and motivated young man. Very inspiring!

From the Ernst & Young article:

“William Wolfram, 21, was only 16 years old when he sensed a popular demand for a novel kind of e-commerce concept and decided to found his third venture, DealDash.

Against the advice of mentors who warned that there was too much competition, William made a bold decision to launch the service in the US. Even though he had previously visited the US only two times, William had a strong conviction that his idea was far more fair to consumers than what existed in the marketplace, and he trusted that DealDash would benefit from the power of word of mouth in the digital age.

Today DealDash is a fun auction house and web store where more than 3 million customs complete more than 2 million transactions everyday. Thanks to social media, a highly differentiated product offering and absolute operational integrity, DealDash has grown to become the largest player in its field and the world’s most talked about brand on Facebook, beating Coca-Cola and Walmart. The company also employs patented bidding models, separting the site from its competitors.

During William’s time as CEO and majority shareholder, DealDash has almost quadrupled its revenues yearly, producing revenues in of €34M and €2M in profit before taxes. [..]” 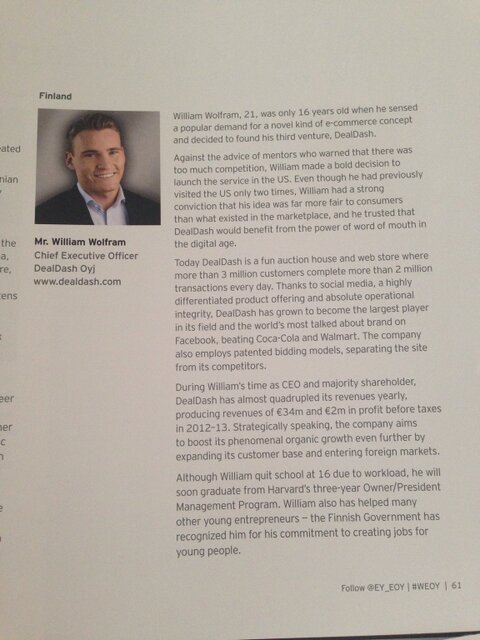 Incredible. I remember back when DealDash was BidRay. They were around back when I started this site in 2009. Wow, how time flies. I’m glad to see a penny auction site that’s been around as long as DealDash has. The article goes on to talk about how William dropped out of school at age 16, when he founded DealDash – he’s now 21, to turn his entertainment auction concept into a business. He’ll soon graduate from Harvard’s three-year Owner/President Management Program!

DealDash makes bidding fair in that users can buy an item at the stated buy it now price and get all of their bids placed back into their bidding account.

That’s why online pharmacies is becoming more pops over the last years. Well-known are remedies which are used to reduce inflammation caused by inflammation of the skeletal muscle etc. There were only few examples. Did somebody tell you about canadian generic Viagra? Maybe you along know about the matter. Sexual disfunction can be a result of a physical condition. Even when it has a physical reason, psychological problems can make the disorder worse. Sex drive problems are so commonly a product of how you feel that there is something to that “headache” saying after all.

Next post: BOTS Galore and Justice Served. ArrowOutlet and the FL Attorney General