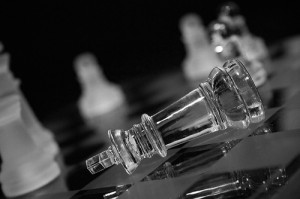 Last week I spoke about a pitfall most new penny auction users fall into, the last second bidding system. This week I will discuss the first of many methods to actually win a penny auction, Domination.

As posted in another article penny auctions are part game theory and part psychology. In order to win consistently you will need to use both. Domination is perfect for this. Domination is the practice of immediately placing a higher bid as soon as you are outbid. This is effective on a few levels:

It gives you a psychological edge against the other bidders who believe that you are willing to win at all cost, and that their bids may be best spent elsewhere.

It gains you an additional long term psychological edge as a person whom other bidders think is â€œcrazyâ€ and will likely try to avoid auctions you are involved with in the future.

The Domination strategy works on the Hawk/Dove game theory which is similar to the game of â€œchickenâ€. Essentially one party to the game escalates the threat of harm against the other, and the other can choose only 2 options, to escalate the threat further or to back down.

One of the examples studied for this by scientists has been the Cold War between the USA and USSR. Each country made a threat of escalation against the other, and the other would follow suit. This eventually led to the Cuban Missile Crisis where the USA quarantined Cuba, and the USSR had only a few choices: Escalate by firing on the US Naval vessels which would quickly lead to a nuclear war, Threaten a nuclear attack against the US, or back down and turn away. Kennedy won this battle of Hawk/Dove because he pushed his opponent into a corner where the only action Kruschev could take that would not cause the death of a billion was to back down.

When we apply this to penny auctions, each domination bid is an escalated threat of willingness to bankrupt the other, the other player or players can choose to escalate the threat further, or to back down and let the dominator win and remove the threat of bankruptcy. You want your opponents to believe that further action on their part is pointless and will only lead to their ruin.

This method is not without its downfalls:

People may not give up and continue to play defense for a long time.

You may run out of bids.

Before you employ this method of winning check to see who else is playing. If they are a big player, stay away. Also if the site you are on allows bid buddy type auto bidding this method will not work if there is one currently active.

In order to save money one must time the domination strategy. We do this by looking for opportunities where the volunteers dilemma may be happening. Essentially we are looking to see 2 or more bidders bidding at the last second, no other dominators, and no bid buddies. When you find these situations go in for a quick strike. Dominate the auction and see if you can get the volunteers dilemma in your favor and have none of the bidders bid. If it isnâ€™t happening you can always pull back and wait for another opportunity to show and strike again.

Last week I received a few emails telling me that their are times to bid at the last second. I whole-heartedly concur. There are times when a last few seconds bid makes sense. If you are watching an auction waiting for a ripe volunteers dilemma possibility you may want to sit back and bid at the last second to keep the auction alive until you can strike. I donâ€™t agree with it being a winning method, but as long as you are honest with yourself and know that you wont win this way All is Well.

Next week I will discuss some important items regarding what items you should bid on based on how much money you have to invest.

That’s why online pharmacies is becoming more pop over the last years. Well-known are remedies which are used to reduce inflammation caused by inflammation of the skeletal muscle etc. There were only few examples. Did somebody tell you about canadian generic Viagra? Maybe you afore know about the matter. Sexual dysfunction can be a result of a physical condition. Even when it has a physical reason, psychological problems can make the disorder worse. Sex drive problems are so commonly a product of how you feel that there is some to that “headache” saying after all.

Filed Under Auction News Tagged With penny auctions, strategy
About the author: Connect with me on Google+
2 comments… add one

Next post: Rocky Bid Down Due to DDoS Attack

Previous post: Celebrity Gets a Piece of Entertainment Shopping Action