Penny Auctions a Mix of Game Theory and Psychology 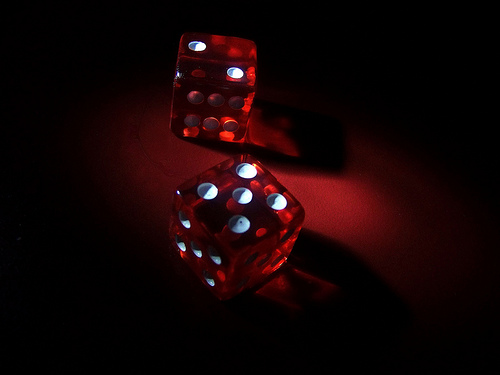 Winning penny auctions have a lot to do with game theory and intimidation tactics.

“In 1950, Shubik, John Nash, Lloyd Shapley, and Melvin Hausner invented a game called “so long sucker.” This is a vicious game, played with poker chips, where players have to forge alliances with other players but usually have to betray them to win. When tried out at parties, people took the game seriously. (“We had married couples going home in separate cabs,” Shubik recalls.)
Shubik posed the question of whether it was possible to incorporate addiction in a game. This question lead to the dollar auction. Shubik is uncertain who thought of the game first or whether it was a collaboration. In any case, Shubik published it in 1971 and is generally credited as the game’s inventor.
In his 1971 paper, Shubik describes the dollar auction as an “extremely simple, highly amusing and instructive parlor game.” A dollar bill is auctioned with these two rules:

1. (As in any auction) the dollar bill goes to the highest bidder, who pays whatever the high bid was. Each new bid has to be higher than the current high bid, and the game ends when there is no new bid within a specified time limit.

Shubik wrote, “A large crowd is desirable. Furthermore, experience has indicated that the best time is during a party when spirits are high and the propensity to calculate does not settle in until at least two bids have been made.”

The second bid puts the first bidder in the uncomfortable position of being the second-highest bidder. Should the bidding stop now, he would be charged 1 cent for nothing. So this person has particular reason to make a new bid “3 cents.” And so on

Maybe you’re way ahead of me. You might think that the bill will finally go for the full price of $1.00 a sad comment on greed, that no one got a bargain. If so, you’d be way too optimistic.

Eventually someone does bid $1.00. That leaves someone else with a second-highest bid of 99 cents or less. If the bidding stops at $1.00, the underbidder is in the hole for as much as 99 cents. So this person has incentive to bid $1.01 for the dollar bill. Provided he wins, he would be out only a penny (for paying $1.01 for a dollar bill). That’s better than losing 99 cents.

That leads the $1.00 bidder to top that bid. Shubik wrote, “There is a pause and hesitation in the group as the bid goes through the one dollar barrier. From then on, there is a duel with bursts of speed until tension builds, bidding then slows and finally peters out.”

Computer scientist Marvin Minsky learned of the game and popularized it at MIT. Shubik reported: “Experience with the game has shown that it is possible to ‘sell’ a dollar bill for considerably more than a dollar. A total of payments between three and five dollars is not uncommon.” Possibly W. C. Fields said it best: “If at first you don’t succeed, try, try again. Then quit. No use being a damn fool about it.”

Shubik’s dollar auction demonstrates the difficulty of using von Neumann and Morgenstern’s game theory in certain situations. The dollar auction game is conceptually simple and contains no surprise features or hidden information. It ought to be a “textbook case” of game theory.

It ought to be a profitable game, too. The game dangles a potential profit of up to a dollar in front of the bidders, and that profit is no illusion. Besides, no one is forced to make a bid. Surely a rational player can’t lose. The players who bid up a dollar to many times its value must be acting “irrationally.”

It is more difficult to decide where they go wrong. Maybe the problem is that there is no obvious place to draw the line between a rational bid and an irrational one. Shubik wrote of the dollar auction that “a game theory analysis alone will probably never be adequate to explain such a process.”

Now,  lets update the game to the 21st century, throw in an online auction script, a few popular consumer items, advertise to get bidders and you have a penny auction.

Is there an explanation for the feared  power bidders?

Do you find it odd when a bidder bids far over the value of an item? Well, Shubik called anyone bidding many times over the value of the dollar irrational and tells us that “a game theory analysis alone will probably never be adequate to explain such a process.”

However, when it comes to penny auctions, and “power bidders,” which can be defined as those bidders who bid at all costs, far over an item’s value (Remember our article-The Bid to Win Strategy for Winning Penny Auctions?). If you observe penny auctions and look at win histories, Bid Rodeo actually shows you how many bids are spent by a winning bidder, you will see that the winner who bids to win at all costs has spent many times over the value of items at least once.

Power bidders spend significantly over cost on items to gain a reputation, when they do this they are saying “don’t mess with me, I have more bids than you!”

Intimidation: It’s all very much psychological. Once bidders have shown themselves be  power bidders the odds of them winning all subsequent items for significantly less than retail become much greater for them and they in turn make up for their overspending.

However, there is  a flaw in the “bid to win” strategy. When two power bidders go head-to-head on an auction, both armed with hundreds  (maybe even thousands!) of bids, and have a resolute goal to win an item, neither bidder gets a deal and only one can win. That’s when one must give up their ego and let go.

Scared of going against a power bidder? If you can’t beat them join them.

Fortunately, you don’t have to beat or join the power bidders to win.  Sometimes winning penny auctions are all just a matter of timing and you can win great items with only a few bids.

Unless you’re bidding on the penny auction site muulu, muulu’ers actually camp out all day.

That’s why online pharmacies is becoming more popular over the last years. Well-known are remedies which are used to reduce inflammation caused by inflammation of the skeletal muscle etc. There were only few examples. Did somebody tell you about canadian generic Viagra? Maybe you already know about the matter. Sexual dysfunction can be a result of a physical condition. Even when it has a physical reason, psychological problems can make the disorder worse. Sex drive problems are so commonly a product of how you feel that there is something to that “headache” saying after all.