ToVieFor is the first Dutch auction exclusively for designer handbags and accessories.

In case you’re unfamiliar with the Dutch Auction concept: A Dutch auctions, also known as a “price drop” or “reveal” auction, are auctions where the price decreases with each bid placed allowing the bidder to purchase the item if they wish to receive a % discount off of retail prices.

We’ve featured a few other Dutch auctions in previous articles, also helpful: Why You Should Care About Reveal Price Auctions.

Unlike other online Dutch auctions that charge a fee per bid, which then decreases the price, ToVieFor charges a membership fee of about 2-3 bids at $0.99/bid to reveal the price. With the more members that join the larger the discount, and there’s a limited number of items per sale. 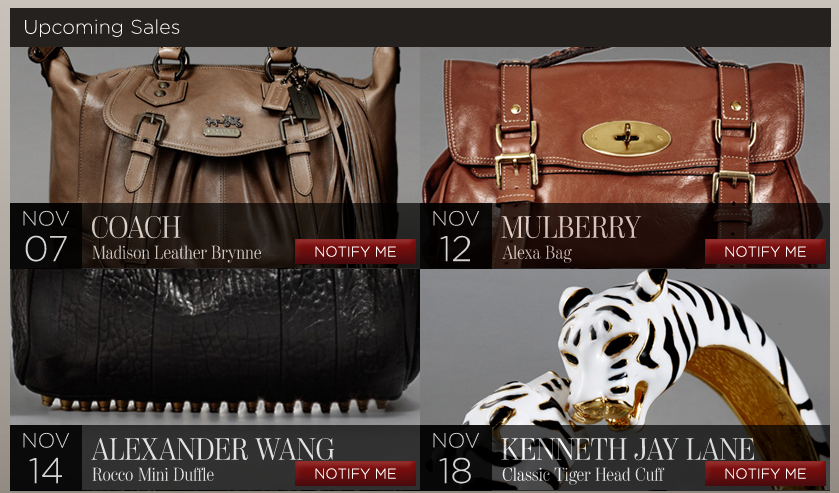 We recently spoke with Melanie Moore, co-founder of ToVieFor. She told us that she had read a scholarly paper on Swoopo and found the penny auction concept to be intriguing, but flawed, and that the model doesn’t allow for much scalability. This is why they decided to launch ToVieFor on the Dutch auction platform, while aiming to provide a unique experience for their customers with rewards & incentives, one recently being a 20% off coupon for all Elie Tahari retail stores.

ToVieFor works directly with designer brands to bring users authentic designer handbags from coveted names such as Burberry, Elie Tahari, Marc Jacobs and Alexander Wang, Mulberry, Coach and more. Reception has so far been positive; brands see the platform as an innovative way to market and fashionistas love the ability to obtain an in-season designer bag at a significant discount. For instance, a Burberry Knotted Sling Bag, recently sold at 75% off the retail price of $750.

Since launching at TechCrunch Disrupt on September 28th, over 2k members have joined. Additionally, they’ve won The Ira Rennert Entrepreneurial Prize of $75,000 and are nearing the end of their 1st round of institutional funding.

Join with our invite to ToVieFor and get free credits!

Have you tried ToVieFor? Join Us! Tell us what your experiences have been with this dutch auction site and discuss all other forms of entertainment shopping in our forum!

That’s why online pharmacies is becoming more popular over the last years. Well-known are remedies which are used to reduce inflammation caused by inflammation of the skeletal muscle etc. There were only few examples. Did somebody tell you about canadian generic Viagra? Maybe you already know about the matter. Sexual disfunction can be a result of a physical condition. Even when it has a physical cause, psychological problems can make the disorder worse. Sex drive problems are so commonly a product of how you feel that there is slightly to that “headache” saying after all.