The same message we wrote to BigDaddyBid.com goes out to all of you fraudulent developers (Net4Bids? FeistySites?).

STOP writing & distributing scripts with shill bidders! Are these the ones that can be found on eBay for $7.85 ? They’re undercuttingÂ  mrsinful0909

We don’t buy it and you shouldn’t either.

The eBay description of the $7.85 script:

You can check out a demo of the website over at:

I logged into the demo page and on the bottom it shows copyright Net4Bids (do a google search on them you will find a ton of the shell sites that are up, this is how I found BigDaddyBid, you may also be interested in knowing that LibertyBids and FlyingHighAuctions both appear to use this script.) In the demo backend under the admin page it shows on the bottom: Â© 2009 Feisty Sites; All Rights Reserved.

It is clear that the auction software provided by FeistySites.com is far from production readyâ€“for honest auctions that is.Â  It seems that most sites that run their software are using the â€œAuto Biddersâ€ feature that allows the site operator to cunningly shill bid their own auctions (aka. using â€œbotsâ€ to automatically bid against you).Â  The documentation provided from FeistySites actually RECOMMENDS to use Auto-Bidders!Â  Using fake accounts to bid against real users is a cut-and-dry scam operation, and some of our competitors are clearly using them.

It’s found in the backend of the admin console on the eBay demo (see it for yourself if you don’t believe us) that sites using this script can and are recommended to employ bots: 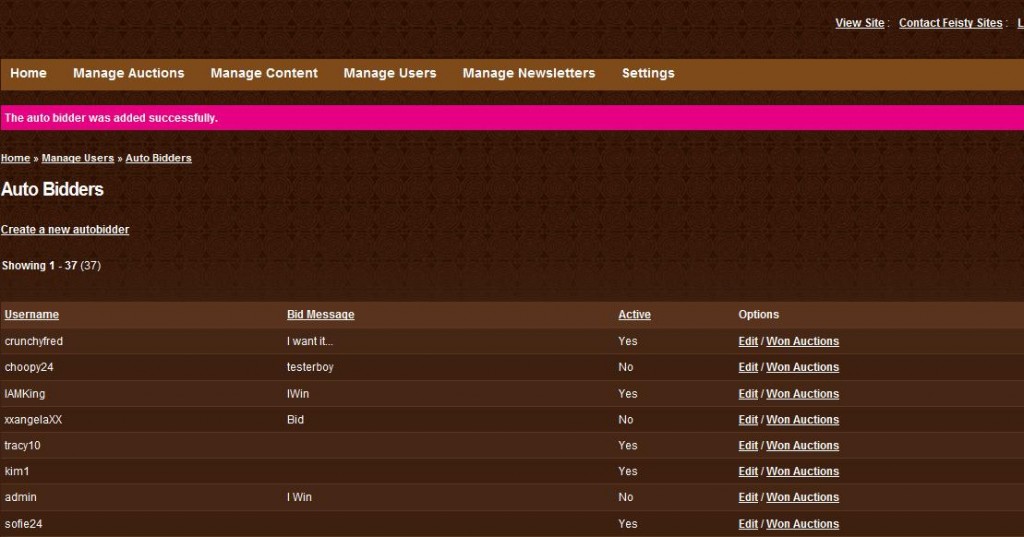 That’s why online pharmacies is becoming more popular over the last years. Well-known are remedies which are used to reduce inflammation caused by inflammation of the skeletal muscle etc. There were only few examples. Did somebody tell you about canadian generic Viagra? Maybe you along know about the problem. Sexual dysfunction can be a result of a physical condition. Even when it has a physical reason, psychological problems can make the disorder worse. Sex drive problems are so commonly a product of how you feel that there is some to that “headache” saying after all.