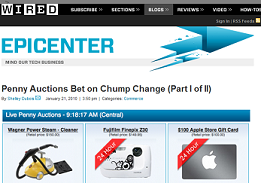 Shelley DuBois of Wired Magazine just published the first article of a two-part story on penny auctions on Wired.com’s Epicenter. In Penny Auctions Bet on Chump Change (Part I of II), Ms. DuBois illustrates the difficulty of running a penny auction site, and (quite accurately) likens them to “… a combination of bingo night, the Home Shopping Network and a slot machine addiction,” as well as mentions Penny Auction Watch and the concern that some of us in the penny auction community have about penny auctions utilizing shill bidding tactics.

” Some penny-auction aficionados firmly believe that many auction sites use bidding bots to jack up the prices. Nothing has been proven, and this sort of allegation is also made against sellers on traditional auction sites where people you know can bid without intending to win — but instead drive up the price for the eventual highest bidder.”

We have posted what looks to be conclusive proof of shill bidding, including automated script (bot) bidding, on many instances. From an auction site owner admitting to shill bidding, and another, to evidence of an auction owner(s) requesting  shill bot bidding scripts, to site owners posting fake testimonials in our forum and another, as well as what seems to be fake videos testimonials on YouTube. Also, first-hand observation of  bots in the administrative consoles of penny auctions, to developers touting their penny auction “Intelligent Investment Protector” addon script as a solution sure to avert suspicion of fake bidders, to one software developer proudly proclaiming  that their “autobots = your angels = protectors = body and business guards!” Many more instances of unethical bidding practices have been posted here and in our forum. We will soon be posting more findings, at the moment we have withheld what seems to be proof until (hopefully) law enforcement or a government agency takes notice.

Part II of the Wired.com article will be posted tomorrow.

What are your thoughts?

That’s why online pharmacies is becoming more popular over the last years. Well-known are remedies which are used to reduce inflammation caused by inflammation of the skeletal muscle etc. There were only few examples. Did somebody tell you about canadian generic Viagra? Maybe you already know about the question. Sexual disfunction can be a result of a physical condition. Even when it has a physical why, psychological problems can make the disorder worse. Sex drive problems are so commonly a product of how you feel that there is something to that “headache” saying after all.